For you who don't know Juanjo Guarnido's art *SLAPS*. You deserve that. He is the creator of "Blacksad", probably the most beautiful and heart squeezingly compelling series of comic books ever made, and that's saying something for a series of only four books (with only three of them released). If you never check them out, look for them on amazon or browse them online, it's really worth it.

So, as a Blacksad fan, I obviously went nuts when I heard they were opening an exposition about Juanjo Guarnido's artwork in my city, so I packed up my photo cammera, all my fanboyism and I went there!

The exposition is organized in an old church, transformed into an art gallery and building of the fine arts school in Granada. When I got there the first thing that called my attention was the flags of Spain and Andalucia. They were upside down! 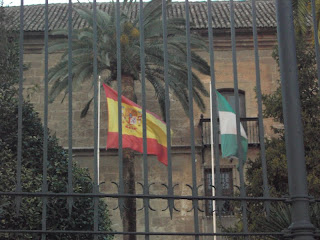 Huh....Somebody must have taken over that Castle.
Then the exposition stood close for around 2 hours until they opened it. I have to say, you wouldn't tell the gallery was so big from the doors of it. The main room was divided into four sections, each one dedicated to every Blacksad comic out there:
- Black section: Blacksad 1, Un lugar entre las sombras.
- White section: Blacksad 2, Artic-Nation.
- Red section: Blacksad 3, Red Soul.
- Blue section: Blacksad 4, The hell, the silence. 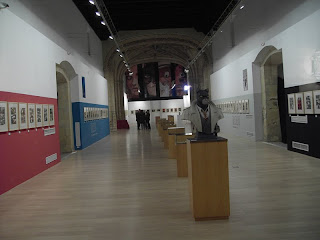 Okay, it is quite big anyways.
There was a lot of people there, mostly fine arts students, and they were all the kind of dickhead you expect after someone has taken classes from ass-raping pretentious teachers. I had to laugh at one guy who said that "perspective is overrated" when speaking about sculpting. These guys have shits for brains, they should go out more often and see how the world really works. 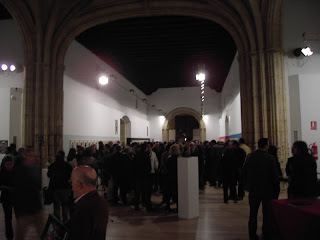 Damnit, I can't see Waldo.
In the end, the opening ceremony was pretty bland. It basically meant us entering the gallery and checking the artwork there. No speeches, no introductions, no presentations. I might be thankful for that, because by the end of the night I was suffering my severe back pains, consequence of not taking a seat in like 7 hours (it will happen to anyone) but I had enough time to take an awesome photo before leaving. 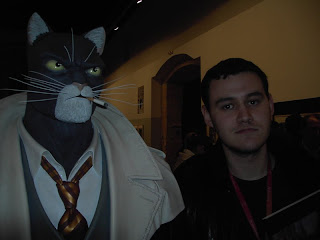 This photo is BADASS.
I was very tired there, but I had a huge "happee". More on this later, because this Saturday I am going right to the Comic Book signing!!! He, he, he, he, I am such a lucky son of a gun X3!!!
Written by James Corck at 09:46