Sometimes it sucks being a Spaniard (some people will argue that it has always sucked being a Spaniard). It was hell to get those few bags of Skittles in my hands, and when I opened I beheld that there was no blue ones.

Oh well, I did the best I could with what few Skittles I had. No blue ones meant I had to use purples for her face outline. I guess you can say this is trying to be "So, Awesome!" But I didn't do her justice. As soon as I get blue Skittles I am re-doing this one. Until then, TASTE THE RAINBOW! 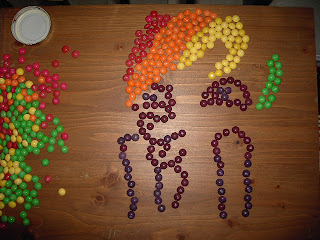 She's screaming for a quick end, so start eating.
And here are the pictures of Derpy Hooves' papercraft sightings. She looks and is better constructed than Rainbow Dash, I even managed to put some letters and give her a good loking set of eyelashes. She also floats :3 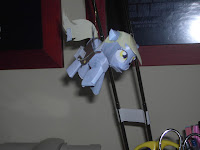 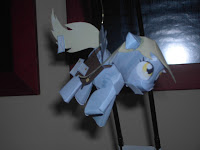 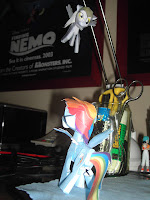 Rainbow Dash looks in envy as she can't fly. Derpy is happily delivering mail.
Written by James Corck at 17:47