Background Characters get lots of Love.

Since that wall-eyed Pegasus Pony now know Derpy Hooves showed up in the background in Episode 1, background Ponies have been the bread and butter of the fandom when it comes to write fanfics and draw fanart. And you know what's the best part of it? They are always really well developed! Derpy Hooves is the most developed of them all, but for the rest of the characters they all have very dramatic very complex storylines written down and fanart that rivals with concept design made by Pixar.

Amongst these characters we have fan favorite couple Lyra and Bonbon, Dr. Whooves, the afore mentioned Derpy Hooves, and getting as popular as Coca Cola, Octavia. Octavia appeared for a couple of seconds during the last episode, playing a Cello and doing nothing but showing a very serious face.

There's been theories for her from side to side. Her being the sister of Pinkie Pie back in the Rock Farm seems to be the most common one, but I am not sure how true this would be. I just hope we see more of her because of how awesome she looks. Black makes her look really classy. So I thought: "Why not? She'll be my background character to draw!" And here she is. I hope you guys like her! 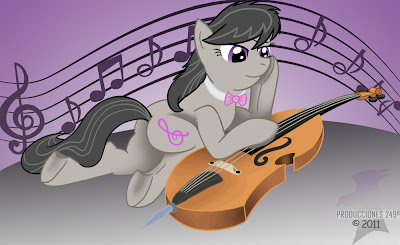