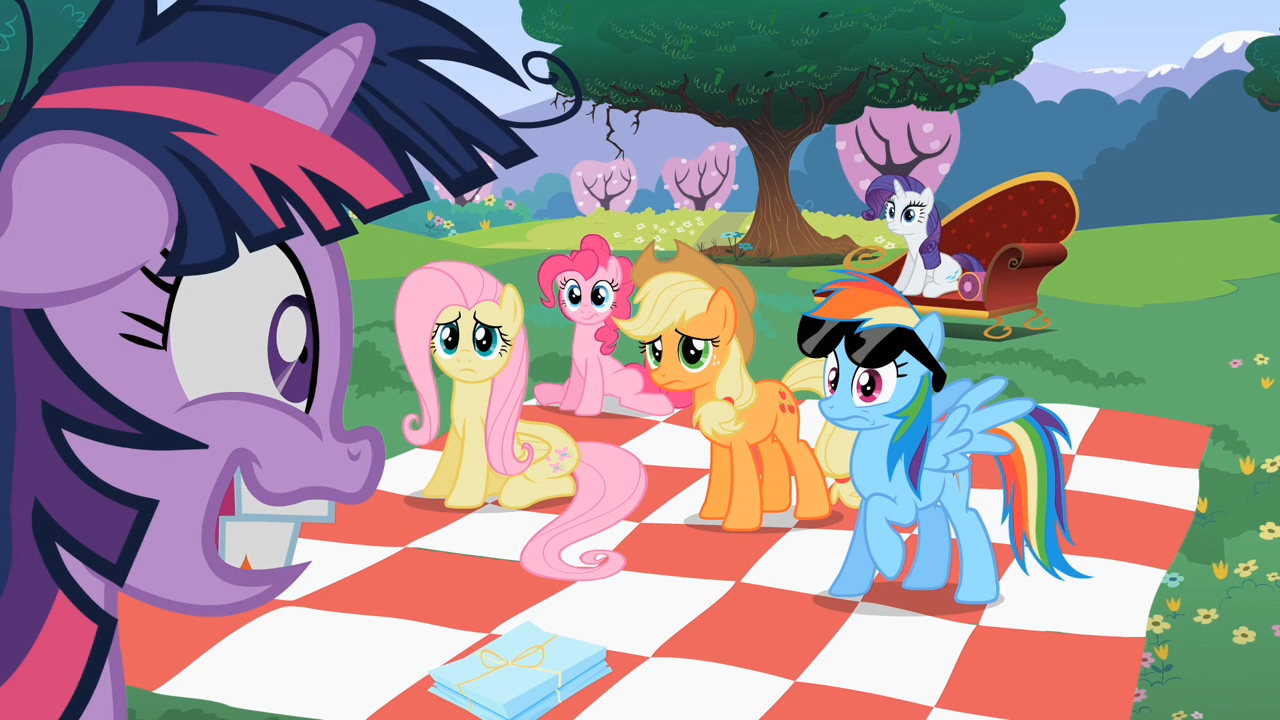 I have to say, waiting three weeks for the new episode to arrive felt longer than waiting the entire summer for the second season to start. Well, after all we had a lot more things to do and keep ourselves busy with. But with the arrival of the second season and this massive GAP (put in caps because it felt huge) has made the arrival of the third episode quite jarring (yes, I mean that in the shocking way). It felt like it was never coming, but now is here! And I’m going to review it!

What’s that? You don’t want to read through my entire wall of text and just get a quick sum up of what I think of it? Very well, here it is. It’s the episode good? Yes. It’s the episode better than the two previous episodes? A lot, and if you allow me I will tell you why. 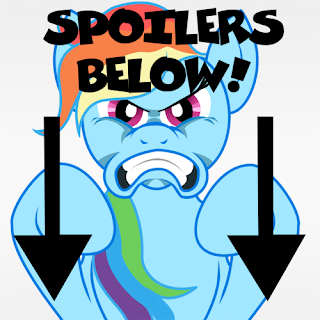 This week’s episode is called “Lesson Zero” and it comes from the quill of Meghan McCarthy, who also brought us episodes like Dragonshy and Party of One. That’s already off to a good start because, if it comes from the person who brought us psychotic Pinkie Pie with straight hair and her imaginary group of inanimate friends, we can expect her to tear Twilight’s psyche apart like a rotten piece of fabric. The episode starts with Twilight doing a shopping list for a Picnic, and if we thought she’s OCD about being organized you better think again. She does lists for everything; even for the lists she has to do she does lists of them. It’s a list within a list within a list. You know, lists feel organized when we read them. It’s not until we check everything in them we realize we forgot something to do. And that’s Twilight’s problem! After coming back from the bakery, where we see her slaughter some poor cupcakes (NO! BAD VICTOR! NO CUPCAKES JOKE FOR YOU!) she realizes that her letter to Princess Celestia about the Magic of Friendship hasn’t even been written, let alone sent. This puts Twilight in Red Alert mode. Being the OCD order obsessed pony that she is, sending a letter late (let alone Celestia’s weekly letter) is bound to send her into a fit. This is when the show turns into 24, with the Sun and the windmill being the clock (they even tick) and Twilight being Jack Bauer, if Jack Bauer had an overdose of Nicolas Cage. Twilight decides to go into Ponyville and help to any of her friends solve their problems. I love that premise alone, because she’s not helping them because she worries for them. She wants to help them because of her own greedy needs. I love how flawed Twilight is, that gives her so much depth!

So now that she’s in town, with the Sun ticking over her head, the first of her friends she runs into is Rarity. She’s frazzled, broken, completely depressed and absolutely not-fabulous. She’s so depressed and in such anguish she has to summon a faint couch to throw herself on. Oh yes, she also has, not a double, not a triple, but a quadruple dramatic close up. “Out of all the bad things that could happen, THIS! IS! THE! ABSOLUTE! WORST!” And what happened to her? She lost her ribbon. A ribbon that she finds a few seconds later, ruining Twilight’s attempts to help Rarity. So our indigo unicorn has to turn around and leave to find any of her other friends in misery to help them.

Her next stop is Applejack’s farm, where Rainbow Dash is beating the hell out of one of the buildings. With that I mean she’s tearing the beams to shreds and splinters with her bare teeth. At least she’s wearing safety goggles, so if anything she knows something about protection. Twilight understands this as the existence of a conflict between AJ and Rainbow Dash, so she does the most sensible thing. She throws Rainbow Dash on a bench, puts on some glasses, takes a notepad and starts of psychoanalyze her. Of course, Dashie doesn’t have any quarrel with Applejack, she’s just helping the apple pony to demolish an old building to make a new one. It’s really interesting to see all the other ponies having their normal lives passing by unaltered while Twilight’s is crumbling like a castle made out of sugar cubes. And how do you end a scene of Rainbow Dash demolishing a building? Why, dropping a nuclear rainbow on top of it of course. I think if TV existed in Equestria Rainbow Dash would’ve created her own version of “Mythbusters”.

Then we move to Fluttershy, and you are not going to believe this but this is the most WHAT THE FLYING F*CK ON A F*CKING TOAST WITH WINGS moment on the entire episode. Twilight goes to see if Fluttershy needs help and we see her being assaulted by a roaring bear. Nothing out of the ordinary so far…until Fluttershy karate kicks the bear on the spine, does a foot twist on him until he cries and finally snaps his neck clean off. I will let you read that again, just in case you got any problem understanding it. You good to go? Okay. If that doesn’t give this show an award for “BEST WTF” moment of the year I don’t know what will. Twilight leaves in a state of shock mirroring the audience’s reaction, and then we see Fluttershy was just giving the bear some chiropractics to ease his pain. That’s so nice. However, SHE F*CKING KARATE KICKED A BEAR IN THE SPINE AND SNAPPED HIS NECK! I’m sorry, but Chuck Norris is no longer a badass. Congratulations Fluttershy, you are the new Chuck Norris.

Back to Twilight, she’s lying on a bench and looks at her reflection. Trying to regain some courage, she starts talking to Gollum…I mean Smeagol…I mean herself! Damnit, why is this show so awesome with the references and shout outs? After Twilight warps momentarily into Lord of the Rings Spike gets to her trying to get her back to reality and failing at such, but not before sending her to the Picnic we were building up to. By the point Twilight arrives to the Picnic her mind is now between the psychotic ravings of an Arkham prisoner (Harley Queen much?) and a Lovecraft character. To the point where I was expecting her to start walking on the borders of the screen. With her mane completely frazzled and spiky, her buggy eyes and her frantic speech, she tells her friends about the problem. But, as expected, they shrug it off giving it the importance it deserves (which is minimal). Twilight doesn’t take the lack of support well and goes back to her house, where the ultimate mental breakdown happens. By the point she decides to make her own problem to try and solve it she’s already a mix between Heath Ledger’s Joker, The Grinch and Gary Busey. At this point I was genuinely terrified, and I expected her to do any kind of insane thing. However, coming out of a beach ball wasn’t one of them. I’ll never play with a beach ball again. So she meets with the Cutie Mark Crusaders and tries to make them fight each other by offering them one of her childhood toys. When they pay no attention to the toy, she enchants it so anypony that looks upon it will fall immediately in love with it. And, you guessed it, like all the times Twilight tries to use her magic to solve a situation, this backfires terribly. Everypony in Ponyville goes insane for the toy and, adding insult to injury, the day ends.

And then, I jumped on my chair.

Celestia’s magnified voice and then she showing up surrounded in an aura of pure light. She un-does Twilight’s spell and sets everything back to normal. But her disappointment is such it melts the PC screen. It’s on par with Mufasa’s disappointment on Simba, just so you can imagine how much disappointment there is. Twilight is taken back to the Library where (I guess off-camera) Celestia scolds Twilight for using magic to force a problem and have a letter to send to her. Right during that conversation, the rest of the Mane Cast show up to take the blow for Twilight. Celestia, pleased, tells them that she will spare Twilight’s life-I MEAN PUNISHMENT, if they all send her lessons about the Magic of friendship, and only when they do learn something. That is brilliant writing right there. This means two things:

By doing this the writing staff might have solved one of the things that anchored the series to its predictable structure and now the show can go anywhere we can imagine without the need of a moral at the end, or without needing Twilight in the plot whatsoever. Just think on the possibilities. But this doesn’t mean the episode forgets to give its moral. It doesn’t just give one, it gives two! Maybe they were compensating.

Overall, this is a perfectly rounded episode. Maybe later on I will watch it and find some flaws here and there, a few bloopers, maybe things that didn’t make much sense, but I highly doubt that. This can be one of the best written, most well paced and perfectly executed episodes of the entire series. The facial expressions were funny and disturbing at the same time, Twilight’s mental sinking into the deepest recesses of her mind was awesome, and all the little stories around her gave the episode the feel of being in the big land that is settled. And the moral, while something that can actually get pretty sappy (“Maybe you and your future friends are looking at the same rainbow!”) in this episode is not just about friendship, but about life in general. It’s wonderful. Simply wonderful. And you know what the best part is? This is the first episode without Lauren Faust at the helm of the ship. If the first episode with her as a Producer Consultant is this good, we have nothing to fear about future episodes. Now if only I could invent a time machine that makes me travel to next Saturday to watch Luna’s episode…

- Defining Moment: Oh boy, so many. I will be fair to Twilight and pick a moment involving her (if I was going to pick my favorite one I’d go with Karate-Shy). Twilight meeting with the Cutie Mark Crusaders. She pops out of the beach ball with a Grinch smile and a creepy, old, rotten plush. From then on, is pure insanity.

- Moral: Two of them! Don’t make a big deal out of a small problem, and never undervalue your friends’ problems even when you know they are small ones (because for your friends, they are not).

SNAPSHOTS PROVIDED BY THE MLP:FiM WIKIA.
Written by James Corck at 21:38