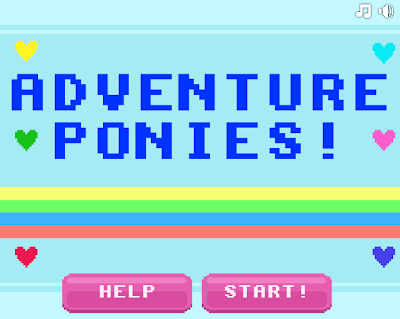 I don't think I need to explain why the Brony Fandom is awesome. Yes, we do have our down moments. Yes, we do have creepy weirdos lurking side to side. Yes, we have Rule 34. Yes, we are obsessed with something that wasn't addressed to us. But hey, you know what? Two things: One, we don't care. And two, so does every other fanbase out there. We just voice out that we are aware of those elements. I think the best aspect of this community, and nobody can argue against it, is how bullshit free it is. I apologise to use a swear word, I've been trying to keep this friendly for everyone to read, but I think it's true. We don't have any bullshit here. We don't have people pretending to be what they are not. If we have people whining about pointless stuff, trust me, those people will admit they are whining about pointless stuff. If we have reviewers over-analysing episodes and going knee-deep into the meaning of each scene, they will admit that, in the end, it's just a cartoon.

I say all this because, despite what people outside the fandom say, I can give an outsider perspective of the Bronies. And so far, it's one of those rare fandoms that affect what created it. It goes from the birth of Derpy Hooves and then on. Who thought that a year later the San Diego Comic Con exclusive pony design would be that of a background character an animator put in as a joke? Who thought that Hasbro would take time and effort in gathering their PR department and their publicist team to create slogans and campaigns like the Poltergeist banner or the Equestria Girls video? How about making a toy of a villain for the first time in the story of the toy line? Or making canon fan names like "Lyra", "Octavia" or "Doctor Hooves"? They seem like small stuff, but they are victories. Victories that count for both Hasbro and the Bronies. It doesn't matter now the rough times we had in the past. We moved on. Now it feels like we embraced each other. It feels like we are working together. Hasbro is looking at us, they are giving us a nod of confidence as if saying "Go for it guys", and we are answering with another nod that simply says "Thank you".

It does feel like it, because few other companies seem to listen to the fans' opinions and take the good things they are suggesting. The HUB releases a commercial on their channel to promote My Little Pony, in the shape and form of an 8 bit videogame, and a few months later the game is premiered in the San Diego Comic Con. Now I don't know if the game existed before the commercial was released, if it was a work in progress, or if it was made after every brony out there went to their twitters and facebook pages and said: "Man, if only this was a real game!" Regardless of how this came to be, I am here to give it a review. I won't do it in a serious tone, and I will most likely use swear words, but I think we all can handle a bit of swearing now and then. Don't expect me to go AVGN levels of profanity, but maybe an "f-bomb" or two will come out. So without further ado, check after the break for the whole story.

So I go to Equestria Daily, check in the news, and I see the entry for the videogame. I go all sorts of "woo-hoo", from Pinkie Pie to Fluttershy. I grab the code, put it in the window on the HUB's website, and I get re-directed. I scratch my head. I do it again; grab the code, copy-paste, enter. I get redirected. I do it again. And then another time. By the fourteenth time I was getting angry, and going "What is wrong with you?" You see, I have something in my Internet browser (I use FireFox) that is awesome. It's an add block program that literally blocks everything, and I mean every single thing. I never get pop up commercial windows, or spam, or commercials in between bliptv videos, it's the dog's bollocks, it's fantastic. Well, this fantastic thing was blocking my access to the game, so I had to go, disconnect it for the HUB's website, and finally get down to play it. I was annoyed, to say the least, but at least the game worked.

First of was the music. I think it was a very good rendition of the new My Little Pony theme, very well done in all its 8 bit glory, and it was very catchy. There was only one problem with the music though. It's one of the only two different themes in the whole game. The MLP theme plays during the normal levels, and then you have some dreading, suspenseful, kind-of darkly toned theme for the boss battles, but it doesn't change either. However that is not something you will notice in the game since the sound effects are very loud. Laser blasts, bucking legs, explosions, fireballs, they all drown the music when they happen. I guess they made it so people didn't end up getting annoyed by the repetitive music. Instead I got tired of all the "Pew, pew, pew!"

We have Twilight Sparkle! She has the ability to teleport and shoot lasers from her horn. There's nothing really special about her, only that she is the first pony you have at the start until you unlock more. I don't think we can argue there. I was very happy to have her on the get go.

Then we have Rainbow Dash, who introduces the gameplay mechanic of flying, basically rendering all the platforming meaningless. She can charge against the enemies leaving a rainbow coloured trail, and she can do this in mid air or on the ground.

The next one is Applejack, and let me tell you, I think that Hasbro doesn't like her very much. You will see many characters have something to them that makes them kind of special, or at least something that matches their personalities. Applejack's especial ability is climbing ladders. Yes. She climbs ladders. I think it's both mean and hilarious, especially looking at an 8 bit cartoon horse fumbling with the stairs. She bucks the enemies into oblivion though, so her short range attack is ungodly powerful.

Our fourth pony is Pinkie Pie, who comes armed with her party canon! She is a mix between Twilight and Applejack, in that she has a long range attack but she can also climb ladders. Seriously, when? How? Why? Wha-? I don't know. Being Pinkie Pie I seriously expected her to walk out of the game window and start blasting my browser's tabs. I bet she can do it!

Then we have one that makes me sad, because Rarity is my favourite character and she is just an alternate version of Twilight. She shoots lasers and teleports. No gems abilities. Also, you can say I'm mean but when I looked at her in the game, all I could think of was...well, this.

She looks fat! I mean, why do I think that of Rarity of all the ponies? That's bizarre, and I think it says more about me than about the game itself. But really, Rarity's character is kind of lazy.

And finally we have Fluttershy, and I think one or two of the game's programmers are Fluttershy fans, because she is a complete game breaker. Her attack might be short range, but she kills enemies in two hits. People say it's "The Stare", but I like to imagine her saying "yay!" to kill them. Death by cuteness. That's what happens to me every time I watch the show. Then I revive.

We have a generic dragon who nobody has theorised who it could be. It could be any of the many dragons we saw in "Dragon Quest". 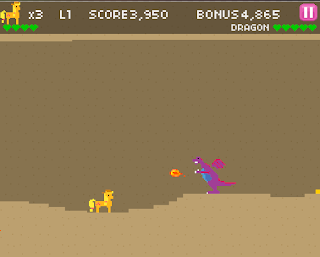 We have The Hydra from Season 1. It even emerges from a puddle of mud, that thing is very cool, probably one of my favourite final bosses. 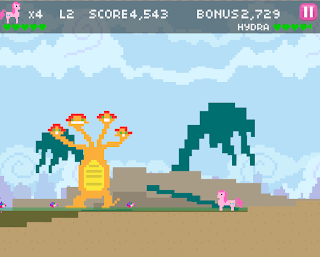 We then have Iron Will. Now this one doesn't make much sense, mostly because Iron Will wasn't the bad guy of that episode, but I think he's my absolute favourite. Why so? Because he charges like a bull in a bullfighting ring! When I fought him I was literally muttering "Ehe, ¡ehe toro! ¡Torito!" It was awesome. 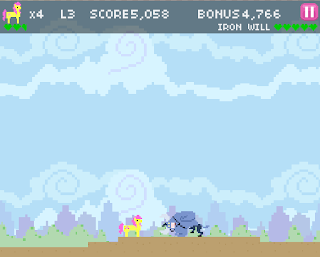 The next one caught me off guard, because I think it says something about the show makers when they use Gilda as a villain. She was a villain, and she will still be a bad girl for all I care. But I am amazed that they went all the way back to the fifth episode to bring her back. Good to see her again. 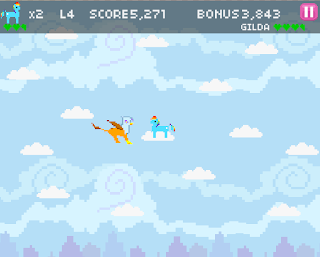 Then we have a group of three enemies in The Diamond Dogs, possibly the easiest villain the whole game. While the dragon shoots fire, the Hydra has four heads, Gilda dashes and Iron Will charges against you, The Diamond Dogs just walk and run to you. If you have a long range attack they won't even touch you. Too bad we are not given the option to defeat them with whining. 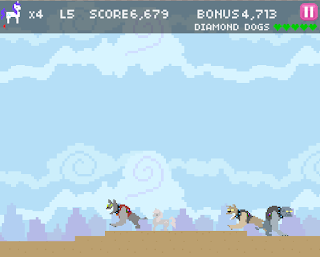 And finally we have Discord. I had no expectations to what I could find, so what I got was pretty cool. He moves fast, covers from the attacks and shoots fire balls. It wasn't until the fight was over that I began to think other things he could do. He could teleport, or he could summon chocolate rain, or poke you and invert your controls, things like that. But what they did was good enough. 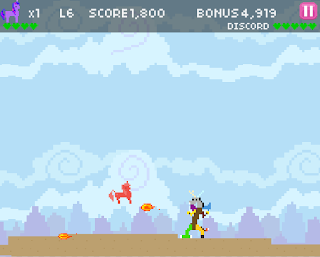 The gameplay is the game's big, glowing, red spot. While the ideas work really well, the placement of the buttons it's a nightmare. You can either use the AWSD or the Arrow Keys to control the character. Up is jump, down is attack, and left and right move the character. The special ability is the space bar. When I played the game I felt like I was about to tangle my fingers in between each other. I don't blame the placement of the keys, but it would've been good to have the option to change the keys in the menu.

So, I think it's time I give this an overall review. What do I think of it? Well guys, uhm, it's ponies, what do you want me to say? I really liked it, despite the flaws, and even though there were some moments where the platforming got insane it just brought back memories of a better time where videogames could be about anything you ever imagined. They could be about a big headed kid with a flaming fist that punched bulls in the face. It's old school 8 bit from beginning to end, all the way down to the animation and the graphics, and it loves it. Until we can get an RPG programmed for a hand held console (either PSP, PSVita, Nintendo 3DS, etc) I think we can do with this game well enough.

- Bottom Line: Great graphics, great ideas, so-so music, weakly decent gameplay. But, like they say, everything is better with ponies in it, and this game has a bunch. If you have two hours to burn, check it out.
Written by James Corck at 18:48