(EXCUSE MY GRAMMAR AND SPELLING ERRORS. CONSIDER THIS A SUPER-SHORT REVIEW WHERE I JUST POUR MY THOUGHTS ABOUT THIS AWESOME COMEDY. YOU'VE BEEN WARNED). 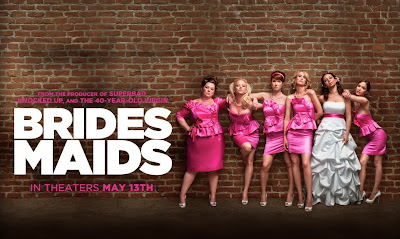 So from time to time comes a comedy movie that changes how comedies are made. The Farelli Brothers had their “Something’s up with Mary”, the Zucker brothers made “Airplane!”, and Monty Python has every single thing they’ve ever done. But sometimes you just want a normal comedy, something to pass the time while you are told a story and maybe even a lesson. Sadly, we don’t have many of these. Comedies nowadays are either game changing, or smelly stagnating in the river banks of creativity-free Hollywood. We don’t have normal comedies anymore. That’s why “Bridesmaids” feels so refreshing.

I’ll be straight forward with you and say that my only motivation to go see this movie was the Bridlemaids billboard that the HUB made with the characters from My Little Pony that parodied the poster of Bridesmaids. I thought “Why would Hasbro make a reference to this movie which is so far away from its target demographic?” Well, it turns out, the movie does have its own “Dear Princess Celestia…” moment. But enough about ponies, this is about a girl who’s life has turned to shit because she is an irredeemable twat.
The protagonist is Annie, played by co-writer and producer Kristen Wiig, a girl who thinks her life is not good at all and for whom things get even worse when she learns her best friend is getting married. What follows is a war between her and another of the bridesmaids Helen, played by Rose Byrne. The funny thing here is, while Annie’s character is the one we follow, she’s not a good person. She screws up, she tries to screw others up, she’s jealous, and she doesn’t take things well. She’s moved by the envy she professes towards Helen’s character, and she’s so angry she can’t see that Helen is only trying to be nice. This is one rare example of a movie where the protagonist is actually a bigger villain than the “supposed” designated antagonist. That was brilliant. But Annie is never portrayed as a heartless bitch or a vile filled harpy. She is broken, she is fragile, she tries but always fails, and you do feel bad for her. You feel bad but you end up cracking up at her dismay. Like Jayson Thiessen said: “You gotta make them hit rock bottom before they learn their lesson”. That is played straight here.
Character wise, and that is without taking into account the “sister love triangle” that is Annie-Helen-Lillian, the character I like the most and I remember the most is Megan, played by Melissa McCarthy. She is this fat chick who always has the most random things to say, who doesn’t seem to be talking sense, but that in the end happens to have the most well developed personality of them all. She’s funny, she’s memorable, and she has hidden depths of a Tolstoy scale. I can’t you more of her; that would be spoilers. We also have the character of Nathan Rhodes, played by Chris O’Dowd from “The IT Crowd”, and quite possibly the only Y-Chromosome carrier character with more than two lines of dialogue in the entire movie that’s not an absolute jerk. He plays a by-the-book cop who falls in love with Annie after stopping her, and he is the most adorable cop in the world. He is a guy you want to be friends with. It will possibly help the fact that it’s a character played by Chris O’Dowd, and that makes him instantly likeable. Besides them, the other three bridesmaids are kind of wasted. I don’t mean “drunk wasted”, I mean they are not used to their full potential. Maybe that’s a good sign. You could easily write a sequel with the characters that didn’t have enough protagonism in this movie, because you so want to know more about them! That’s the sign of a good script, you want to know more! At the two hours mark this movie feels welcomingly short.
Overall, I wouldn’t call this a girls’ movie. It breaks the mold enough that it blurs the limits between silly sit-com, gross-out comedy and romantic comedy. It’s not a new concept, that’s for sure. I’m sure there have been other movies treating this same kind of plot before, but this might be the most memorable one. This year is full of sequels, super hero movies, book adaptations, remakes and crap, so when a movie as original and interesting as Bridesmaids comes out, I wouldn’t turn it down for everything. If you heard good things about it, they are true, and maybe even better than you heard. If you heard bad things about it, well, I guess someone didn’t need a laugh.
Written by James Corck at 00:45