An OC Pony drawing (and a dusted off Rainbow Dash sketch)

I am not one to do OC's (Original Characters) based on TV shows. I am more fond on doing it from videogames ^_^ But honestly, I had no interest whatsoever on doing an OC based on "My Little Pony: Friendship is Magic". I still don't. OC's usually are a bunch of Mary Sues and Gary Stus with zero personality and a God complex. Thankfully, it looks like the MLPFiM fanbase is aware of this and so they created some OC's that are grounded in reality and have flaws. That is, they have personality.

However, this is not the case. My sister asked me to draw her a pony, and I was happy to oblige. Besides, I can also check that achievement in the Equestria Daily list. So here I leave you with "Bouncy Lock". 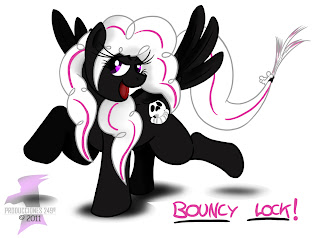 The contrast between character and name is rather jarring.
I've also dusted off this first attempt I made on drawing Rainbow Dash. It's my first Pony drawing, and I totally forgot to show it to you guys. I would upload it in FurAffinity, but I don't want to over-clutter my gallery with ponies. I may post this later on in Scraps. 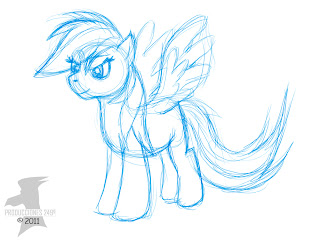 She looks more tomboyish than ever!
Written by James Corck at 12:29