And yes, it's more ponies. Why the hell not?

I see this new thing going on with Spyro and those "Skylanders" or however they are called, and I have to say they look actually pretty cool. I'm not a Spyro fan, so I can't share the calls of betrayal some fans are shouting over Spyro's re-design, but I really like the idea. It blends collecting small figurines and videogames, two of my passions. However I didn't get into it because it's too expensive.

I mention them because for me, collecting stuff is my bread and butter. When I set to collect something, I'll collect it. I did it with Pokémon, and now I'm doing it with My Little Pony. So when I heard the McDonalds pony toys were coming to Spain, I called my nearest McDonalds restaurant to learn when they'd receive the toys. That day was today, so I went there to get the first one: Pinkie Pie.

I go into the restaurant, and I explain in a very casual way:

"I am a My Little Pony collector, and I was wondering if I could get the pony toy you give today with the Happy Meal"

I seem to have a Charisma of 10, because the girl behind the counter comes at me and says:

"You know, we have some sample toys here we don't give away. Do you want them? You can take all of them now."

I replied with a very polite smile and a calm "Thank you". My inner brony however was rickochetting into my rib cage like a freaking pinball ball. Not only I got all the pony toys, but I won't have to walk three miles to get to the restaurant. I'm really happy I get these, but not all of them are that perfect. I'll make a short overview of them before finally closing 2011 in this blog. 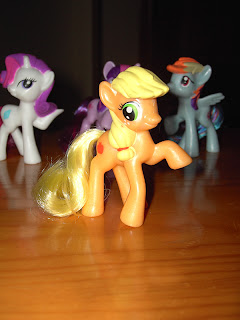 Applejack might be the worst of the six, but not for her design. She actually looks good, and her pose is dynamic, but the toy is severely damaged. The paint is almost gone between her fringe and her head. The lack of hat is compensate with the frekles! 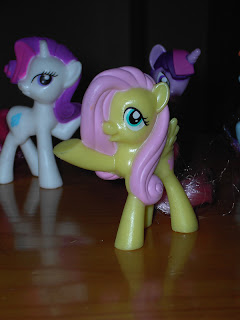 Fluttershy is cute. She's always cute, no matter how angry she gets, or how bully she becomes. This toy is no exception, but I have one thing to mention. Many of these toys only show one eye. Fluttershy, Rarity and Pinkie Pie only show one eye, which is odd since the mane is solid. However, this is one of the best, as the hair looks really good. 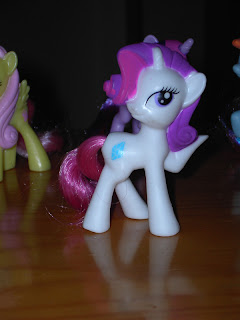 Rarity might have the best pose of the entire set. She looks like a 3D version of those awful vectors, which makes it odd the fact that she looks so good. I have to mention that the cutie marks are not 100% accurate, but with so little space what do you expect. Also, look at that tail. That looks great! After all, she's Rarity. 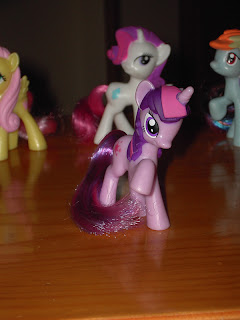 Now Twilight is, without a doubt, the best of the set. Her hair looks great, her colors are perfect, the cutie mark is accurate, and I love that dorky expression in her face. She is fantastic. It's weird though, because if you look her face to face she looks like she has chops, and the tail is a tad too long, but she is the best. And I'm happy, because out of all of them I wanted to have Twilight the most. 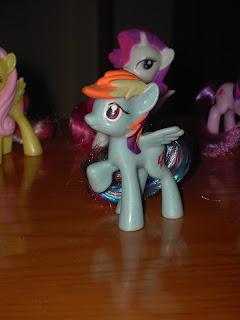 Rainbow Dash saddens me the most because...Well, look at those wings! Do those look like mighty, fastest pegasus in the World wings!? She looks like a pidgey! And the duck face doesn't help. I like the fact that her mane and tail colors are actually accurate, and I find it nifty that she has Firefly's cutie mark. Somewhere Lauren Faust is seeing this and she's giggling. 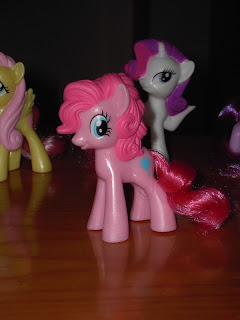 Well, and the best hair award goes to: This toy! I mean, look at the tail! That's so good! Why can't the official big toys come out of the box like that? They are delivering Pinkamenas all over the World! Then on December 31st they will acquire conscience and take over us using kitchen appliances and fridge magnets! Run! Run! Oh, and the toy is pretty cool too.

So that was it. I definitely call this the last post of the year. And to keep into the Christmas Spirit, allow me to show you a detailed picture of my Christmas tree.