Twilight Being all Badass. 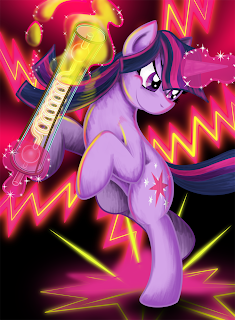 Because DeviantArt likes to be a bitch sometimes, you guys over here can have this first hand. Hopefully I will be able to send this to the groups over there once DA stops being slower than the Spanish economy.

You can get the bigger version after the break.

This one took a while to do, but only because I got wrapped up on other drawings and I totally forgot about doing the sketch for it.

My good ol' friend Arran and I were talking one day, and he mentioned me something called Ruhmkorff Lamps (I hate that name, I can never remember it!). These lamps were used in the 19th century, and if you read "Journey to the Centre of the Earth" you will remember the protagonists using them to light their way through.

So my friend comes to me and says "You should totally draw Twilight with one of those, they look really cool". Five minutes later, the sketch was done, and after a couple of hours on photoshop with my crappy tablet this is the result. I wanted to make Twilight look all badass as she uses this lamp like a magic wand in order to power up her magic spells. Why would her magic spells be powered by the lamp? I think the combination of the electron particles of her magic with the condensed gas inside the tube causes the particles of the spell to increase their mass and thus making the spell more powerful.