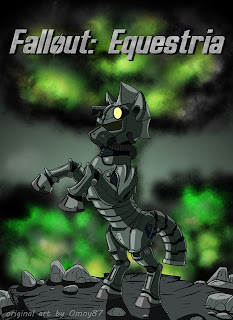 Check this AMAZING fanfic right now
You can also check the fanart website here
I have been working since March in a Graphic Design Course that has ended a few days ago. For the Final Project of this course we were meant to do something related to print publications, whether it was a magazine, a book or a comic. The subject was free. My first plan was to make a magazine out of Equestria Daily and call it “Equestria Weekly”. Sadly, this would’ve caused me to go nuts trying to figure out what to do next and how to organize all the elements (we also had a three weeks time limit to do so). So instead of doing that, and champing my teacher’s motto “Simplicity is king”, I decided to make a book version of Fallout Equestria.

What follows is a visual record of the book in its final stage. I edited it and showed it to my teacher, but I didn’t print it until I got the approval of Kkat. I contacted Kkat in FurAffinity and received a very glad approval with a few words of advice. Being this a class project neither I nor Kkat will receive any profit from this work. Also, it won’t be published anywhere. This is the only copy that exists and that will exist. Consider this the “Wasteland Survival Guide” of the real World, if things didn’t work out for poor Moira.
Enjoy some pictures! 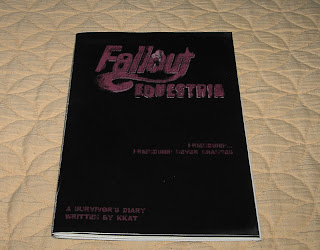 Fallout Equestria Logo made by DotRook 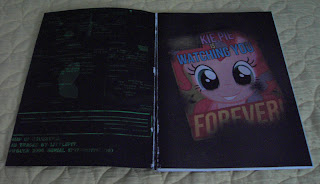 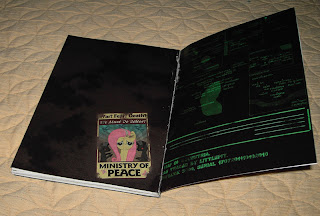 I really feel bad for Fluttershy in that picture
Make sure you download that Equestrian Wasteland Map for your PipBuck
And that’s about it. It took me two weeks to edit the whole thing and my teacher was incredibly pleased with the results. He didn’t mind the artwork or the writing though, since the subject was free for us, he just wanted us to make a good job editing it. I think I did alright, what do you guys think?
I want to make one last disclaimer.
I don’t own any of the drawings, vectors, writing or designs used for making this book, as well as the settings and characters created by Obsidian, Bethesda, Kkat and Hasbro. I want to thank the original creators of the art and the writing for this, and I hope I have featured they authority correctly and properly. I am getting no profit and no revenue for this project, being just a class project, and I in no way intend to publish or make this more public beyond this blog.
Thank you all for checking out this blog entry, and I humbly appreciate your opinions and comments.
Written by James Corck at 00:00