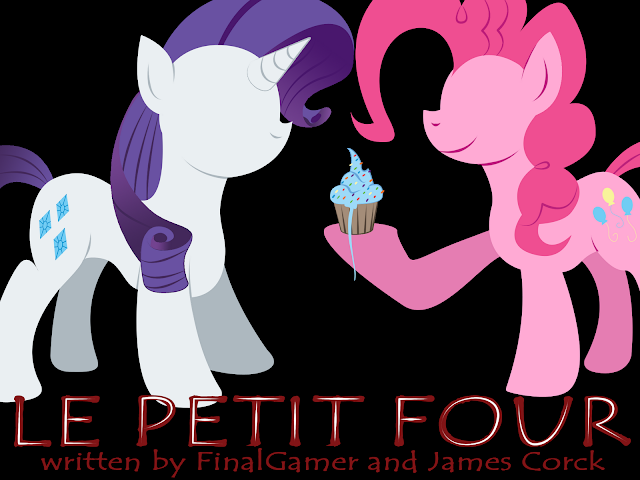 Do you guys and girls remember the interview I did for the awesome Voz de Sueños a couple of months ago regarding my fanfic "Le Petit Four"? In it I told how I got around writing such an abomination of pony torture that one can expect from a Cupcakes sequel, and I also thanked him greatly for the original live read he made. This live read is what ended up making us becoming friends with each other. Well, he was kind, awesome and cool enough to gather his four friends and make a new live read of it!

This is probably the best live read he has done, and not only because he and his friends did an awesome job getting plasttered and reading my horrifying fanfiction. Their reactions are priceless and it's a lot of fun, so if you are into this sort of thing I recomend you to check it out.


WARNING! ADULT CONTENT AHEAD INVOLVING
ALCOHOL ABUSE, SWEARING, AND DESCRIPTIONS OF VIOLENCE INVOLVING FICTIONAL CHARACTERS. WHILE I AM THE AUTHOR OF THIS FANFICTION I STILL WANT TO WARN EVERYBODY BEFORE YOU KEEP MOVING FORWARD. IT'S THE RIGHT THING TO DO.

Okay, are you sure you want to keep going forward?

Then click on any of the three Sad Rarities under these lines. But be sure that she is going to cry throughout the entire video, and her tears will sink into your heart. Now if you excuse me, I gotta go see if my Rarity toy is safe. So much worry over something that doesn't exist and never will, eh?